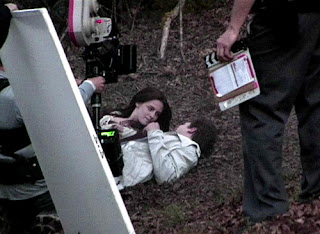 Wow. Did everyone see this? I feel like I should have been a consultant on this article or something! MTV released their 'Twilight Tuesday' update this week and it was all about the adaptation process, plus an interview with Greg regarding the hurdles and responsibilities involved when adapting a well-loved novel. Certainly check it out if you haven't. They reveal an added scene, publish the dialogue of that scene and discuss the reasons for the addition.

I like the point that Catherine makes in the video about one look that an actor gives another actor in the film can cover twenty-five pages of text from Stephenie Meyer. Because of this, they are able to add extra scenes and dialogue in order to develop the characters and keep us interested (i.e. not having five scenes in the Bio classroom; instead there may be three scenes there and an extra scene in a greenhouse for visual diversity). We don't have twenty-five pages of text to get to know the workings of these character's brains. Instead, we have time and observation. Much like how Edward can't get into Bella's head, we have to find other outlets to get to know these characters like extra scenes with them... because unlike the novels, we can't get into Bella's head either!

This quote from Greg really sums up my thoughts on my observations of the Twilight adaptation:

"It's very important to distinguish that we're making a separate piece of art that obviously is going to remain very, very faithful to the book," Mooradian added. "But at the same time, we have a separate responsibility to make the best movie you can make."

It shows their intents, their awareness of the novel's following, and the respect and involvement given to the author while still working towards creating a good and interesting film that doesn't fall flat because it tried to stay too close to the book (think of the first, and maybe the second Harry Potter films. They tried too hard to be true to the book and came off looking too Disney-esque and the dialogue contrived and unnatural).
That's it for now; no amazing facts or secrets to share today, I just wanted to comment on the attention being given to the adaptation process by MTV. I'm off to a remote island in Lake Michigan for a week, then to Pennsylvania for a week to see my folks, then back out to Portland for a week for some odds and ends :), then back to the Boston/New Hampshire area until I go back to Wales in September. I'm working on an article regarding Twilight's adaptation, as well as an interview with some of the game designers from the Lord of the Rings Online game. I'll keep you posted.

Posted by ScullingOnSquam at 18:45 3 comments: