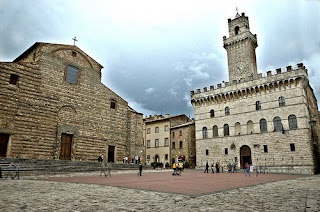 Just wanted to bring these up. There was an anonymous comment on my last post (thank you for your extremely helpful input!) of these pics of the fountain in the square.

First of all, they're gorgeous, and second of all, I'm really interested in what this is going to look like when it's all done. Maybe they found these too? Maybe they're going to try to get something to look like the original? Inspired by the Italian masters? We shall see!

I'm not sure who the owner is, so I'm only linking back to their page. Full credit to them :)
Posted by ScullingOnSquam at 17:59 1 comment: 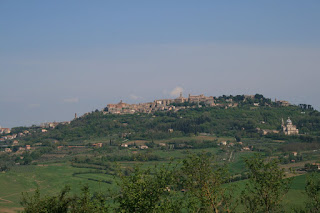 Sorry for the delay, but now back to Montepulciano...

It was lovely. My trip back to the States last month was brilliant, but it was jam-packed, busy as anything, and I was exhausted at the end. Italy, on the other hand, was like one, big, spa visit :) I felt so rested and focused when I came back, and Montepulciano was certainly the highlight of the trip.

We drove from Siena to Montepulciano and on the way we stopped in Montecino and Pienza, 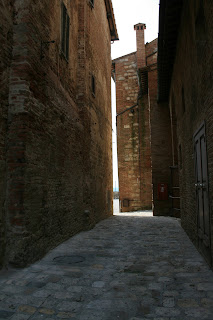 both cities famous for their red wine and peccorino (I'm sure I'm spelling that wrong) cheese...so good). The countryside of Tuscany was beautiful; rolling green hills, tall cyprus trees lining the drives of vineyard after vineyard, and ancient walled cities every 20km or so, one of which was Montepulciano.

I made my father pull over at one point so I could get a picture from the road as we approached the city, as I'm sure it'll be an establishing shot in New Moon. The city sits on top of a hill and while it's gorgeous in hues of orange, red and brown amongst the greenery, it is rather ominous and forbidding. That's the point of these hill-fort towns though, to protect them against invaders and be forbidding; that's precisely what Montepulciano does. It certainly 'sets the scene.'

After navigating the incredibly confusing, centuries-old roads (seriously, I'm amazed my father didn't kick me out of the car for leading him astray as his navigator). I then spent the next three days wandering these alleys, photographing as many of them as possible (there are 60ish photos on my webshots album, but I took 402. Yeah, 402.), and enjoying the quiet peacefulness of the city while sampling its fabulous food and wine :)

On my second day there I was sitting in the 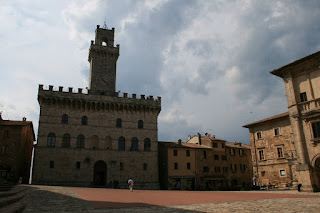 Piazza Grande working my way through a film theory book with a glass of red and enjoying the general splendor of the beautiful day and the striking architecture that would soon be turned into a film set. Behind me I noticed a sign in front of the Information Center for the town, and as I approached it I could see it was the call for extras auditions for New Moon. The men one day, and the women and children the following day. 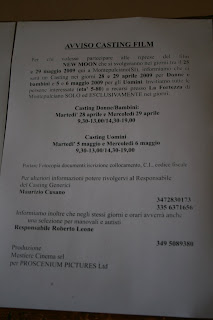 I went into the Info Center and asked one of the employees there a bunch of questions about Montepulciano's participation in the filming. She hadn't heard of the books, but she said she did notice that they were going to be particularly busy during that week, despite that usually being a fairly quiet tourism time for them. She said that she had been handling some of their hotel bookings, and that she was also helping out booking accomodation and other odds and ends for the film crew. 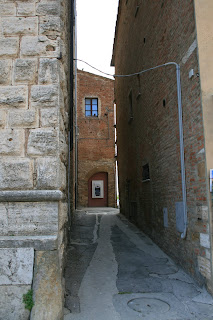 It was clear pretty quickly that she didn't know what the town was in for. I told her I had heard about a gathering of the Italian fans that was going to take place at the end of filming and she just said 'that's nice. We're excited about the tourism.' It will be neat to talk to her after the filming, and again perhaps a year from now to see how tourism has increased due to the Twilight connection.

Anyway, I got some good quotes from her and a couple of leads about where filming might happen around town, so I donned my camera again and returned to wandering the streets of Montepulciano.

Obviously the Piazza Grande will be used. That will be the busy square that Bella runs through 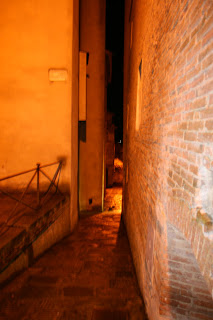 just as the clock (conveniently on the tower) strikes noon. There are two alleys on either side of the main building, and both are fairly atmospheric, but I'm not convinced that they'll be the ones used in the film. Looking at the front of the building, the alley on the left is the town's public toilets, and the alley on the right is a cash machine... practical, yes, but not very visually dynamic. You can see on the pictures though just how they might be dressed, or how the camera angle could change to include only those elements that the filmmakers want. 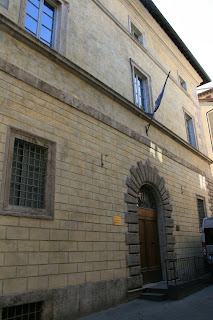 The other building that they are supposedly using (none of this is confirmed, I'm just going on Montepulciano's tourism board), is the Palazzo Selimbini. It's about a ten minute walk straight downhill from the Piazza Grande. Sadly it wasn't open, and honestly, I'm not even sure what it is yet (hotel? Restaurant? Bank? They've all come up on my searches, but the sites are in Italian... yeah... let me know if anyone finds out). But I took pictures anyway. It is a forboding front, so it could be part of the Volturi headquarters, and there's a really good-looking alley (yes, I became a connoseuir of alleys on this trip) right next to it... so who knows?

And the final day I climbed up the clock tower building to the terrace and took some photos from there of the gorgeous scenery. It was also a national holiday (literally, such is my life... of course it was a national holiday), Italian Liberation day, so there was a band in the square, and it was the most blue-sky day we'd had since we got there. 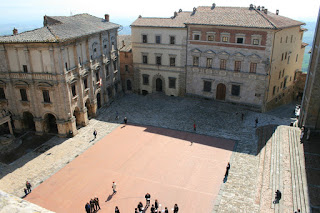 It was definitely a brilliant town, and it is how I pictured Volterra in my mind. I'm not certain why it was Montepulciano instead, but if it projects the right feeling, is believeable, and nothing makes you say 'oh that's just not an ancient fortress-city in Italy'... then it's good. For all intents and purposes it's perfect... but then again, I haven't been to the actual Volterra, now have I?

Anywho... my webshots are here, please don't reproduce them without credit and permission. Cheers!
Posted by ScullingOnSquam at 14:04 28 comments:

Let the Right One In 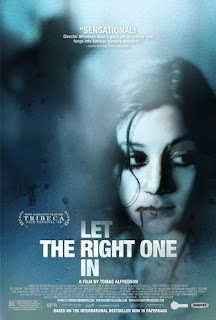 So I was in London last week for a media archives training course, and decided to go see Let the Right One In (Låt den Rätte Komma In), as it's certainly not playing anywhere in North Wales, and apparently I'm now a vampire movie expert (even though I have yet to see Coppola's Dracula...I know, I know, I'm a disgrace... I'm on it, don't worry :-), and lots of people have been asking if I've seen it yet. I'd heard a lot of the buzz, and figured it was certainly something worth checking out.

Let the Right One In is an independent Swedish film by director Tomas Alfredson, and written by John Ajvide Lindqvist, based on his novel. It's about a sober, bullied, twelve year-old boy named Oskar who befriends his mysterious new neighbor, Eli; Eli smells kind of funny, often walks barefoot through the snow, and only comes out at night... it's only later that we discover this is because Eli is a vampire who has been twelve years old for a very, very long time.

It. Was. Brilliant. Seriously. I've just recently been exposed to the pleasures and versatility of World Cinema, and it's fascinating. The things people seem capable of doing when Hollywood studios aren't in charge amazes me. There are other, unique stories that are able to be told that simply 'wouldn't sell' in Hollywood without a better reason that simply being brilliant. How refreshing, huh?

In this film, I'm sure the budget was minimal, but it wasn't necessary to be large. The only special effects were the movements of Eli, and to be brutally honest, they were far superior to Edward's cartoon-like running or his sound-effect-enhanced speeding around the Volvo to open Bella's door in Twilight. I found those effects kind of cheesy, and also the tinkling when Edward sparkles, and the cheese factor took away from the more respected aspects of the story.

The gritty realism of Let the Right One In, and the raw atmosphere of it simply lend to the believability. It's a harsh climate (perpetually snowing), very little daylight, muted, dated colors, and the emphasis is on the pseudo love story of these two twelve year-olds, along with a lot of the pains of growing up. Serious issues such as bullying, lost love, bad relationships, death and divorce come into play, but it all just contributes to this compelling story between Eli and Oskar.

This is from Ebert's review (who I'm not a huge fan of, but he sums this up nicely):

Remove the vampire elements, and this is the story of two lonely and desperate kids capable of performing dark deeds without apparent emotion. Kids washed up on the shores of despair. The young actors are powerful in draining roles. We care for them more than they care for themselves. Alfredson's palette is so drained of warm colors that even fresh blood is black.

And that, I think, is an interesting part. That if you remove the vampires, you have a compelling, striking film that tugs at the heartstrings and all of that, but with the vampire element, it takes on this fantasy appeal, and you know how I feel about fantasy... I think once something is declared fantasy it allows you to put aside your own hesitations and uncertainties, and analyze big concepts more easily. If this was just a love story, I'd be hung up on the bullying, or the disgruntled parents... but because it has a bit of the supernatural, I can look beyond the plot points and examine the nature of love; what it's capable of overcoming and confronting, and how far friendship may go.

The shots were great, the characters great, the quirky humor moments great (attacking cats, dredging bodies...), and the young actors that carried the film were superb.

I do wonder if it's getting more attention because of the raised profile of anything vampire right now (thanks to Twilight's success), but I kind of think anything that draws attention to the power of independent film is okay by me.

I just hope Hollywood doesn't do a 'remake' soon. Let's just hold onto the original for awhile.

Posted by ScullingOnSquam at 13:20 8 comments: