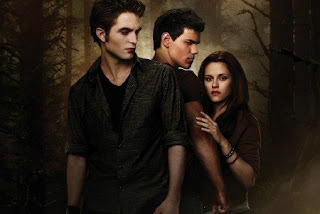 I'm sorry it's taken me so stinkin' long to get this up, but this year is called 'hell year' by most 3rd year PhD students in the UK, and thus far it's living up to that! Monumentally busy... but good :) Teaching, working in the international office, writing an article, editing an anthology of Twilight criticism, and planning some Twilight events this spring (Vampire Baseball and Fan Film Festival Cruise- wahoo!)
But, now to the point.... I've seen New Moon. Three times. My immediate reaction: pleased. Improvement. Smoother than expected. Better performances than expected. Elements still stilted and dialogue still lacking occasionally, but overall I thoroughly enjoyed it! I think I should scan in my notes that I took during the film- as it was dark (it was in a movie theater, obviously), they slant all over the place and are at times on top of each other, so I'll try to make out what I wrote.
Things I liked:
Things I didn't like: 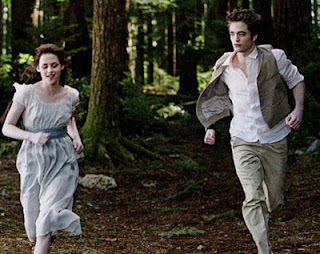 I know I've been doing a lot of comparison to Twilight in order to rate New Moon. It's hard not to acknowledge the first film that is so burned into our memories, and was certainly such an impressing and formative filmmaking experience for me. If I were to just look at New Moon, and try to remove the preconceptions from Twilight, I don't think I'd think New Moon was very good. If I hadn't read the books, if I didn't already enjoy this world, I don't think the film would appear fluid, well-structured, and interesting. It doesn't follow the general rules of three-act script very well, character development is lacking, and honestly, I found the plot under-structured.
It is in the novel too; that's not necessarily a bad thing, the whole point of the book is to illustrate Bella's despair, show the depth of her feeling toward Edward, develop the relationship with Jacob and develop the threat of the Volturi. In that sense, mission accomplished, and accomplished quite well. But the adaptation 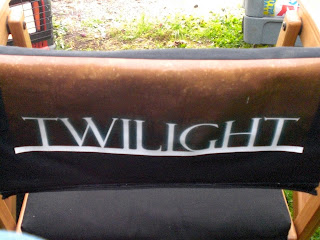 challenge arises here when one considers how to turn that transitory novel into an interesting film. They made it a great adaptation for fans, I think. It's a very, very difficult one to make a good film and appease the fans, and monetary success was guaranteed if they made the fans happy, so I think that was more of the focus; true to the book, true to the fans, make them happy, and they did the best that they could with the material.

Therefore, I think this was a wonderful step in producing a better adaptation. Chris Weitz always said this was a film for the fans, and he stood by that throughout. If this film was a project for the fans, and hopefully for a few people to get into the books who were unfamiliar with them previously, then I think it has succeeded. I certainly enjoyed the film. It was entertaining, I think the performances improved, I think the script improved, it was more fluid, the music was brilliant, and I thought the cinematography was often quite beautiful. It's hard to say 'this looks good for the series, it'll only get better...' because you want each film to be brilliant. You want them to stand on their own and be very good, but in this instance, I think we have to look at it in the series.
With Twilight, they didn't necessarily know what they had. They knew it had a fervent following, but no one anticipated the reception that it got. Now they DO know what they have, and that is changing the adaptation process, the filming, the release, and everything else. I think each film will improve on the previous one, but they'll continuously struggle to make a good film that is also a good adaptation.
That's the challenge, and what I find so fun to study!
More soon, but there are the initial reactions and thoughts :)
Posted by ScullingOnSquam at 18:07 6 comments:

Want to make a film on a cruise?

Holy crap look at this!
So there are a ton of talented Twilight fans out there- I've seen your YouTube videos- so this is for you as well as those of you who have always wanted to give filmmaking a go, but haven't found the opportunity or the right situation.
Well I just found out that I'll be going on Fan Trips Fan Film Project as an organizer and lecturer! The trip begins in New Orleans right after Vampire Baseball (check out the link; Peter is putting together a team again- awesome), they've got a bunch of professional filmmakers, producers and editors that will be assisting small groups in making their own short.
It's pretty much like a 48 film festival, but you'll be assisted by pros, instructed in filmmaking the day before filming, and oh yeah.... IT'S ON A CRUISE SHIP. You get a day of film classes, then a few days of shooting in amazing locations, time to edit, and then at the end of the cruise we'll screen everything at the festival and the winners will be announced.
The pros will do individual workshops too, I'll 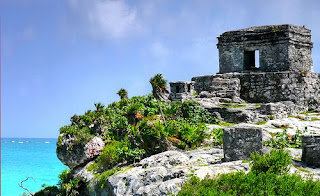 talk about my work with Twilight, and a thousand other wonderful things... on the Carribean... Oh. Girl.
Plus the grand prize winner gets a walk-on role in John Goodman's upcoming vampire film Girls Gone Vamp! Whoot. I'm getting wicked excited.
If you want to go, book fast- it's filling up like crazy, and it's really reasonable; as a film student I can tell you film classes and experiences like this are never this cheap...
Hope to see you there!
Sweet.
Here's the schedule, here's the link to sign up!
We'll leave from New Orleans and go to :
Posted by ScullingOnSquam at 16:14 1 comment: 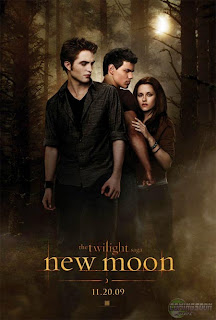 So the tension is starting to mount for New Moon's premiere, and I think I'm FINALLY getting excited. I've certainly been more removed from this film, both by accident and by design. I wasn't on the set of New Moon, I haven't done any pre-release events, I've been reading the updates on the fan sites and the information released by Summit of course, but I've not had much insider info on this one and have actually been focusing on writing up my PhD...go figure! But it's been kind of nice to be a bit more removed from this one, believe it or not!
With Twilight I was so predisposed to love the film prior to even walking into the cinema due to watching the process, speaking with the filmmakers, seeing scenes ahead of time, and feeling that I knew what the final project would be like before ever seeing the full thing. I enjoyed the process so much, was glad to see the care that they took with the script and how much the story meant to them, that I was pretty much already decided that I'd like the film both as entertainment and as a cinematic work. Even now, all of these months later, I still certainly enjoy Twilight, but I can be a little more discerning about it. It's not a work of filmic genius, and in retrospect, it was almost too faithful to the book, to the point that the film was quite stilted in parts; the fans could fill in the holes, but the non-fans would feel it was a bit jumpy. I think this was necessary for the first film of the series, to maintain the Fan base and still introduce a decent film (think Harry Potter; how literal the first two were, and how stilted and dry they were as films. They had to do that to maintain the fans, keep the films close to the books, then once the fans were on board completely they could change a few things, take some chances, and make films that differed slightly from the books, but made much better films).
I'm excited to see New Moon, because it seems to be being handled rather differently. For one thing, it was an almost completely closed set. The producers I spoke to during Twilight were trying quite hard to get me onto the set of New Moon, but it didn't work out as there wasn't a 'visitable' day for me to go, and the gang I knew said I'd never get the kind of exposure I got during Twilight. The set was much more protected and secret. I wonder if this allowed them a bit more creative control; I wonder what liberties they've taken. I also think they've finally realized that they have something big here; a big moneymaker, an influential film in the industry, and massive power with the fan market. They're protecting their product, and frankly that seems to just be adding to the appeal! We have less leaking photos and information, and I think that is raising the suspense for the film.
I'm excited to see the visual elements under Chris Weitz's eye; it's looking more 'Hollywood,' yes, but I certainly don't think that's a bad thing for this film right now. It needed a bit of a boost so the production matched the reception; so the wolves don't disappoint, the sparkling doesn't look fuzzy and have that horrid tinkling sound, and so the romantic moments aren't cheesy and overdone..... and it looks like it's getting more of that treatment.
I'm sad I won't be at a premiere for it this year, but I'm kind of stoked to go see it normally in the theater with fans and non-fans alike, and make my own decision, removed from preconceptions.
In other news, I'm writing up my thesis, teaching two classes of Digital Communication, presenting at a conference next week on the 'Utilization of the Fan Base in Event Film Adaptations', turning that into a publishable article, I'm collecting proposals for my own anthology of Twilight criticism (see post prior to this one), working part time in the International Office, and somehow still managing to have a bit of a social life, travel, and make some plans for some Twilight-y events in the spring (Vampire Baseball anyone? :)
More soon, I'll try and do better updating this more often, particularly once New Moon comes out (a review at the least is coming, and hopefully some analysis too), and my spring activities start formulating a bit more. Happy wolf-watching all :)
Posted by ScullingOnSquam at 10:17 No comments: