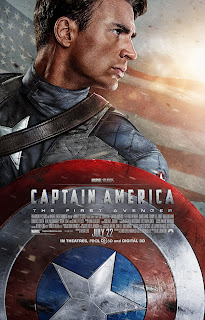 I can’t believe I haven’t written this yet. Sorry! I’ve been traveling, and am in the backwoods of New England at the moment with little to no Internet connection, and therefore I haven’t had the motivation to update the blog; I’ve been thesis-ing and swimming in a lake.
However, how could I NOT update about Captain America after being on set in November?!
Have you seen it yet? No? Why the heck not? Even if I hadn’t worked on it, I’m pretty sure I’d be hooked. What a fun film, and a great intro into a new hero in the Avengers/Marvel world.
So, my overall reaction? What a bloody brilliant film. Particularly the first third. All of it was good fun, a few moments fell flat (mostly with regard to editing in my opinion-- the montage of him as a soldier destroying the Hydra plants... the cuts were too short and the action too fast; it was tough to gauge where our hero was and what he was doing. Although there were some fabulous moves with that shield in that section), but overall I thoroughly enjoyed it. I usually do a pro con list for film reviews, but you'll notice this one mostly starts with the phrase, "I loved it when..."

So, the first third: I LOVE an undiscovered hero. So when you show me a scrawny, unknown, 90 pound but gutsy kid… I’m bound to fall in love with him (plus, what amazing CG. Aside from a few blips with the voice, it was seamless).  I love that he tried so hard to join the army; that he stood up for what he believed in whilst in a darkened theater; that he sincerely cheered on his friend when he was about to be shipped off to the armed forces even though he was jealous, and wanted to go for the most noble of reasons.  I also love the man (no matter how scrawny) that steps into the shoes of ‘potential hero’ because it was his only shot at doing his duty, whilst embracing experimental procedures.
We’ve covered the scrawny, fatherless hero in past posts (hello Beowulf, Frodo, Harry Potter, Taran, and Bran….), but there’s also the reluctance to be a hero that comes along with them; the fact that they don't see themselves as strong heroes only enhances my love of their heroic qualities. 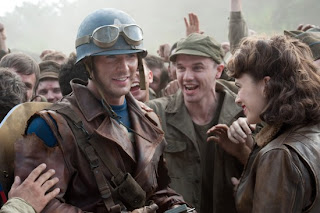 I loved, loved, LOVED the scenes where he 1) threw himself on the grenade, unthinkingly sacrificing himself in order to save those around him; 2) took the flag down on the training run by rather clever means; and 3) chased after the bad guy through the streets of ‘Brooklyn’ to catch baddie, 4) Was cheered and celebrated when he returned with the captured soldiers and meekly turned himself in for disciplinary action, as his duty required. I love me a lil' hero worship.

Side note, I loved the character of the strong, brave scientist who believed in the good spirit, and not just the strong body (well done, Stanley Tucci). Emphasis of the good man, over the strong, huge, perfect body (although he got that shortly after... and it was a very nice body).
I also loved how they dealt with his costume. He is one of the more cheesy heroes in the Marvel world, with wings on his hat, and a funny shield, so what a brilliant move to use the 'Poster Child for War Bonds' with a chorus of dancers and a showman quality in order to explain the presence of the costume in his life. I like how they roughed it up a little and made it more World War Two-ish, though, once he was out of the costume and into Stark's designed uniform. He wore it all well. Very well. 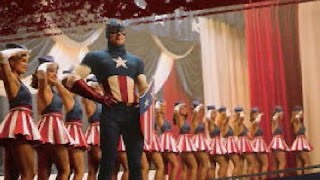 The last two thirds were certainly enjoyable, but they didn’t match the first third for me. It was very entertaining, but also quite predictable with a few moments where you could clearly see the CG, he almost looked like a video game version, and some cheesy elements like 'Chicago' clearly painted on the bombs; almost cartoonish.
As for the predictable, at this point he was a superhero, there was a girl, and there was an enemy, but because of the first third, I was more immediately rooting for this hero than I have been for others (don’t get me wrong, I LOVE Iron Man, Thor, etc. but it took a few viewings for them to weasel into my heart… Steve Rogers? Not so much. Although that may be due to the fact that Chris Evans was such a lovely human being on set. He was kind, considerate, and very pleasant and professional.  He was always ready, he would run between the shot and the director's screens to look at his performance and chat with Joe, he'd tap people on the arm to say "hey" and ask how their day was, and texted the AD when he arrived on set just to give her a heads up-- a rare move, but a much appreciated one.
Now, from my on-set observation, I’ve a few fun facts:
The days I spent on set, these things were filmed:

1) Captain America and Bucky’s POV in the Hydra Plant when Red Skull first pulls off his mask. I say Captain America’s POV, because Hugo Weaving/Toby Jones’s scenes were filmed weeks beforehand.  Even though the scene looks seamless between the two parties, only one was present that day.  This was just after Bucky's jump when there's no way for CA to get across, Bucky shouts "There's gotta be a rope or something!" ... CA: "Go on! Get outta here!" Yup. That was it. It took hours and hours.
This is also the kind of stuff that makes me realize how actors earn their money.  They first had to pretend that the other actors were there, also had to pretend that the entire plant was burning down around them, and lastly, that the rest of the plant was even there at all! Whilst it looked like the plant was huge, five stories tall, and filled with equipment, all that was actually built was a staircase, a platform, and a wall. They were all very impressive, but minimal compared to what we saw CG-ed onscreen.
2) The prisoners running out of the Hydra plant. It was maybe 6 seconds on screen, but took about four hours to film. There were 20 extras that ran through the doors a number of different ways with a number of different camera angles so when it was all cut together, it looked like there were about 100 extras. Rockin'.
3) Inside the Hydra train after they zip-line into it, the shot where the Captain throws his shield, and where Bucky gets thrown out of the side of the train. This took all day. It was very cool though. A huge train in the middle of a sound stage, lots of green screen, effects.... very cool.
Yup, that's it! Three scenes, and it took two, twelve-hour days.
Fun Facts from the set:
- ‘Brooklyn’ was pretty fabulous, because that was actually Manchester, England.  The attention to detail was lovely; the little, red-headed kid with the surprise "go get him! I can swim!" and my utter inability to distinguish where CG began and the set ended… it was great, and very well done. 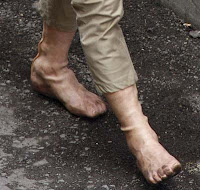 Also for this scene the props/costume department made Chris Evans prosthetic feet in which to run, because whilst Captain America was a quick healer with strong feet, Chris Evans was human and had to run through the paved streets of Manchester very quickly, and still be able to function the next day without cut up and blistered feet.
- The shield in the ice. One of the first things I saw was when Joe Johnston was consulted about which way the ice should be designed for the shot where we see it in the ice.  They had the shield under a clear block, a frosted block, they chipped away at it to get it just right, and took the shield from Chris Evans's arm to place it behind the ice block and photograph how it looks. Yes. I touched the shield. Squee!

- There was a 'dead body' wrangler. One of the prop masters who looked after two dummies used as dead bodies. They weighed a ton, and he actually had to carry them firefighter style to move them around; but they were very convincing, unmoving, dead weight dummies.
- On the second day after Chris Evans was done, he spent about an hour chatting with a group of 20 Sega Games people who were on set getting an inside peek at the world of Captain America. It was neat to see the intertextual image sharing early, as the game people had one image in their head of the hero, and then it was replaced, enhanced, or opposed by the images they saw on set.

What a brilliant experience, and I can't bloomin' wait to own it. I sure hope it has good special features :) Bring on The Avengers! By the way, everyone saw the Avengers teaser after the Captain America credits, right? So. Good.
Posted by ScullingOnSquam at 22:39 1 comment: