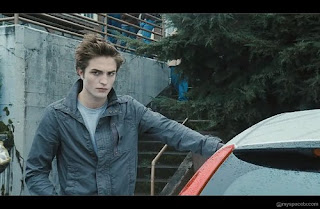 Can we just discuss the new Twilight Trailer? I'm starting to worry that I'm not going to be able to look at the film objectively and critically at this point because whenever I see a new scene or a new image from the film I just get excited, and possibly a little giggly when staring at Rob Pattinson.

I think that's because I already have a lot of faith in the filmmakers though. I'm not waiting 'to see' or 'to be disappointed.' I already know that they are treating this adaptation better than most could imagine; I've already seen some pages, some scenes, and I know that it hasn't clashed with my perceptions of the novel, and it certainly helps that Stephenie Meyer was involved in every step of the process, approves all of it, and endorses it wholeheartedly. Just seeing the care that they've put into shooting every scene and the work poured over the editing process, well, it gives me some hope that this won't turn into a situation like The Golden Compass or The Seeker (ugh...depressingly appalling adaptations).

I'm sure all filmmakers care about the film they are working on, but I'm guessing that many just think of a film as a job and nothing more. While I know that the crew of Twilight have never once forgotten that this is still a business and they are responsible for its success or failure, I feel like they've truly cared about making the film for the fans, because they are fans too. They didn't want the film to be too different because it would alienate their own vision of the novel, not to mention the millions of fans they'd disappoint too. 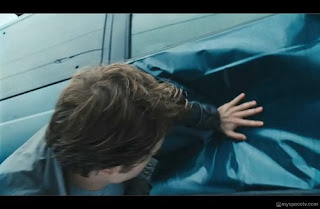 And this new trailer... okay, the scene opens with an establishing shot of the Olympic peninsula, effectively setting the scene with tones of purple and gray with striking green hills to illustrate the mysterious and other-worldly feel of the location, and the first thing that struck me from a film-study perspective was the transitions, particularly in the first thirty seconds or so as the ethereal music comes up, until just after Edward stops the van from hitting Bella. If you'll notice, almost every cut is a quick fade to black and a quick re-light. To me, this looks like eyelids closing sluggishly and opening back up again on a new and equally as fantastic scene (fantastic as in fantasy-like). This technique throughout the entire trailer reveals in snippets what Bella is seeing, and how she is figuring out the story. I think this is a great device, as the book is from Bella's point of view, this opening and closing of 'the eyes' makes me feel like I'm a bit in a dream and watching this fantastical scene unfold in front of me through her eyes. Even though it's not from her point of view, it still feels like the trailer places you in an observatory point of view. It's not just clips cut together (although there are a few clear cuts) to show the action, it's an experience that draws you in. Also, the moment that Edward swoops in to save her in the trailer, the picture goes to negative, which I think is just brilliant. It's in that moment that Edward has decided (or not decided, but acted instinctively) to reveal himself entirely to Bella. His cover is down, and everything is reversed, and it all changes after this point; so the brief flash of the scene in the negative effectively illustrates this. Brilliant. With the other-worldly music at the beginning, and the suspense-filled phrases: On November 21... Nothing will be the same.... From the Worldwide Bestseller.... Forever... Begins... Now... the sweeping shots of the Gorge, the slow-motion of Edward and Bella walking to school together to emphasize their unusual relationship and how it sticks out to those around them, the focus on the supernatural elements of the Cullens leaping and running... it all makes for a very well put together trailer.

It's interesting how much of the supernatural they are releasing in this one trailer too. Having 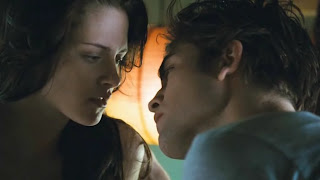 Bella say 'Vampire' especially after hearing about radioactive spiders, kryptonite, heroes, bad guys and watching Edward rip apart a tree and gracefully catch an apple off of his own foot super-hacky-sack style... it raises the interest as well as the expectation for what we're about to see. He's a different character than most have ever experienced before, and I think the trailer illustrates that well. Many vampires have existed in the history of literature and film, but not one that abstains from his drinking-from-humans tendencies ("My family, we're different from others of our kind"), lives as a member of a loving family, falls in love with a human and proceeds to date her (the kiss... oh, the kiss... need I say more? You can almost see Bella 'attacking' him and him obviously enjoying it, but trying to restrain and back off at all times, and "You are my life now," Yes, I swooned. I know I've talked about the visible chemistry between Kristen and Rob, and Stephenie Meyer has also talked about it at length, but hopefully you can see a bit of it now too)... these are new territories in the realms of storytelling; hence, perhaps, part of the huge appeal of Twilight to readers, although just the dreaminess factor of Edward alone doesn't hurt.

I also enjoyed seeing some of the scenes that I watched being filmed in April- now edited, filtered, cleaned up and rehashed on film. It's bringing the whole experience full-circle. Like the restaurant scene- there was only the one small clip in the trailer, but it looks so different from what I saw filmed in April. The light is softer, the sound clearer, the focus more exact. It makes me wonder which of the hundred takes taken that day they used, and how they decided that those shots were the perfect ones to piece that scene together. And I think about how that was a really rainy day, it was cold and very long, they shot that angle of Rob's face with the back/side of Kristen Stewart's face at least two dozen times, Kristen was full of mushroom ravioli and was worried about eating more, and how none of that peripheral drama plays into the scene at all. It still amazes me how when creating a film all of that side action of 'real life' is forgotten and the focus immediately comes back to the text and the story. Just think about how often in a day you get mad, or hungry, or giggly; can you imagine having a small slice in the middle of whatever emotion you're feeling be completely removed from that situation? I don't think I can turn things on and off like that... I guess that's why I'm not an actor! 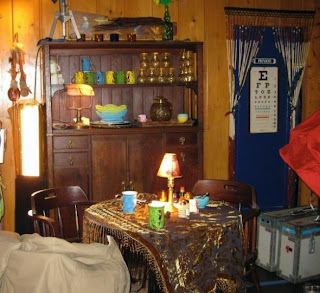 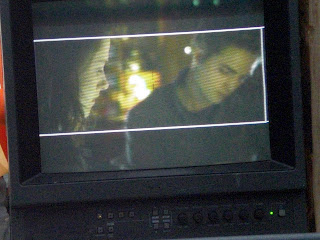 (This first picture is the restaurant with no special lighting; it was before they started setting it up for filming and I was able to duck in and take a picture. It's all a bit chinky and somewhat awkward, and the second one is a screen shot of the day, and you can see how it already looks more appropriate and romantic with the lighting etc, and then see the clip from the trailer and it looks spot on. It's so interesting what they can do with art directors, set dressers, and lighting.)

And while I'm on this tangent... I think I've said this before, but it was also interesting watching the preparation processes of Kristen and Rob. Kristen would disappear for a long time between scenes, spend a lot of time in her trailer, and she didn't linger around with the other actors much. She would prepare, focus, come into the scene and shoot it brilliantly, checking herself in the middle of takes, asking to do it again if it wasn't right with her etc., whereas Rob would meander, do what he pleased, and when it came time to film he would pause for about twenty or thirty seconds before action, stare at a spot on the floor or off into the distance, and then he'd be in it; he'd be Edward. It was just neat to witness how differently they prepared and how well each tactic seemed to work for them.

Of course I'm now even more intrigued than I was to see the film in it's entirety (I didn't think that was possible...). I'm working on an article right now on how Twilight is adapting a work the way that I think works should be adapted...at least in the realm of fantasy literature, although the principles described can apply to any adaptation. I just feel like when a film is created by fans for fans, with the help and approval of the author, if that underlying passion and desire to present the film as well and with as much of the spirit of the book present as possible is there- it just easily translates to the film. There's no way not to feel the passion and care put into a work when people really care (i.e. The Lord of the Rings. That was a whole set of Tolkien fans, and look at how well the films turned out, winning scads of Academy Awards and winning over millions of book-loving fans).

I. Cannot. Wait. It's been such a brilliant experience to live with this adaptation from the beginning. Well, not the super beginning as I wasn't there when Greg Mooradian bought the rights, but seeing it from filming, to editing, to marketing, and soon to release... it's all very exciting. Just the filming techniques put into the trailer give me hope that the film will be even more specific and thought-out.

Posted by ScullingOnSquam at 10:36 26 comments: