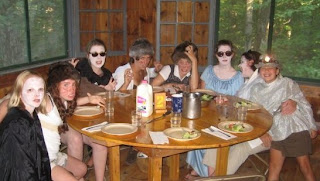 I realize aside from the 'I Heart Stephenie Meyer' post, that I've been pretty darn quiet recently, so I thought I'd just jot down what I've been up to.

After the Breaking Dawn weekend of craziness, I went to my college roommate's wedding in New Jersey, then to camp in New Hampshire (it's an all girl's camp that I've been going to since I was seven. It was my 19th year there- 10 years as a camper and 9 as a counselor... doesn't that make me sound really old?? I'm only 25!). That was great. Probably about 2/3 of camp was reading one of the four Twilight books, and nearly all of them have read Harry Potter, so we had a good time up there chatting about our obsessions in the great outdoors. I dressed up as Harry Potter for Showtime (our skit-show in the middle of camp), and on the last day of camp everyone at my table dressed as Twilight characters and we took over the dining hall; no one was allowed to get their dinner until the showed us a superpower that a vampire or werewolf might have. We even had a very small camper wearing all silver stuff (she looked like a human disco ball) and a headlamp- she was the Volvo! It was great!

So after camp I went to hang out with my folks for a bit in Pennsylvania, unpacked and repacked everything (I've literally been living out of a suitcase all year, so I had to re-evaluate what had to come back to Wales with me), and went on a mini roadtrip to see friends and professors in Washington DC and Fredericksburg VA (I did my undergraduate degree there, at the University of Mary Washington). I was then home for 24 hours and then on a plane to the UK. 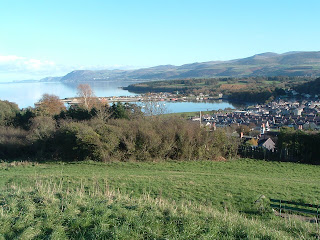 I've most definitely been living in denial of the fact that I'd be returning to the UK, so when my plane touched down in Manchester, England, it was very, very surreal. I love the UK. I still do, I always have, and I hope I always will, but I've never been a fan of leaving anywhere. It doesn't matter where I am or where I'm going, leaving stinks! Most of the time I love arriving, but this time was a bit tough. I've just had such an incredible year; I've traveled like crazy (something that makes me happy...literally, it's like a shot of happiness straight into my system), caught up with friends and family, read like a fiend, had tons of new experiences, got to talk to authors, visit with game designers, immerse myself in the adaptation of Twilight and truly lose myself in my work.

I. Have. Loved. Every. Minute.

You can't often look back on a full year and not remember any bad days. So it was very tough to say goodbye to that and head back to Wales where people haven't shared the same experiences with me, I don't know what my department is like right now (a lot of stuff is up in the air), I don't even know what classes I'm teaching yet, and school starts in TWO weeks! I'm not sure who's still in town of my friends.... it's a lot of 'not sure' stuff, which makes for a rather anxious return.

I'm sure it will all be fine; it usually is! I tend to make the best of whatever situation I'm in, and I have a lot of new persuits to try this year (teaching, international ambassadorship- let me know if you're interested in studying abroad, it's actually part of my job now, and I really want to pick up sailing or something like that...), I'm really glad to see the friends I've been away from, and my work is still going well. It's certainly slowed down a bit as I'm away from contacts and events and the like now, but now I can settle heavily into research and writing, and planning (TwiCon 2009 anyone? I'm planning the academic panels, so I'll be there. And check out the link... there's something big a-brewin').

So there's the rundown on what I'm up to and an illustration of a hurdle that can arise in studying abroad. I'm going to start prepping for my classes (I can't believe that I don't take them anymore, that I actually teach them...there's a new experience!), I'm working on a couple of articles and will hopefully get them out in the next few weeks (one on considering fans in an adaptation, and one on the inter-media aspects of Twilight), I'm gonna run every day, take in the gorgeous scenery, and remember that I love this place, too. It's different, but if something didn't change in my life, I wonder if I would have started to take all of those wonderful adventures for granted. You have to have some 'normal' times to appreciate the sublime times! That's what I'm telling myself anyway :)
Posted by ScullingOnSquam at 16:01 2 comments: