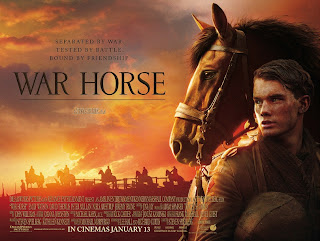 War Horse had so much going for it. It's based on a play that I've heard only wonderful things about, it involves horses (I love horses), men in uniform (I enjoy men in uniform), it was a war movie, directed by Steven Spielberg, countryside of the UK, music by John Williams... so many good things, right?

Yeah, it was rubbish.
I realize I should qualify this: in my opinion, it was rubbish. But really, I'm surprised by how much rubbish I think it is. I'm the girl that finds positive points in anything (*cough Agent Cody Banks, Percy Jackson, Last Holiday cough*), and it was very difficult to find positives for this. Particularly because it falls on the day that the Academy Award nominations were released, because this was nominated for 'Best Picture.' Sure it was pretty, decent talent I suppose, lovely shots, so there may be something there for cinematography, and the sounds of battle were great, so sure, sound mixing...I could see that... but BEST PICTURE?! No. 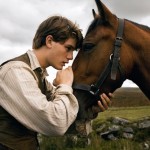 I found it so indulgent. So superfluous, over the top cheesetastic...and I love cheese! Of all sorts! And this was just wretched. If there was one more shot of pondering in the sunset, or staring deeply into eyes, or a 'change of heart' from the hard army man (seriously, how many times did that happen?), or ceremony for the relationship-- the one near the end where the whole army posse gives him thirty pounds to buy the horse... ugh... indulgent. Cheese.
Now, I'll hold up on the rant and just focus on a couple of film/structural things that stood out.
Tone: I felt like it wasn't sure what kind of film it was trying to be. It had the tone of Babe at times, with the goofy goose and the wire cutters getting chucked over the barrack wall... but really, with the emotion and seriousness that this film was trying (trying...so hard...) to get across, I think it should have been more  towards the Saving Private Ryan tone. There were gorgeous moments in Saving Private Ryan that reflected humanity, the horrors of war, the desolation and destruction, and also some very clever, humorous moments. I think War Horse could have done that, and it was a missed opportunity. Instead it went to Cheeseville.
It was just godawful "I'm gonna try to force you to cry... watch me! Here! I'll swell some music! Here! I'll throw in another sunset! How about a 'sick' little girl falling in love with the horse (I say 'sick' because really, she coughed once in the last scene we saw of her... other than that, she ran around, trained a horse, made jam...)" Right... I'll stop there... you see my point, I hope.
Loose ends (it's entirely possible I missed their conclusion and it's my mistake; I was catatonic by the end):
1. The guy in the beginning who had the silk lining in his hat... Is there a reason we spent so much time getting to know him? And had a parting shot of him in the back of the ambulance?
2. His friend in the barracks? We assume he died, right?
3. The rich ass of a landlord-- any comeuppance?
4.  The pretty girl in the car-- I can only assume that the fact Rich Boy didn't remember her name was to add to his own character of rich, haughty, and takes things for granted. But why did the girl keep getting brought up?
5. The sketch in his pocket- why didn't they pull that out when he was trying to prove the horse was his? And if they weren't going to use it, why show us his effort to fish it out of the bucket and put it back in his pocket? So we can see that he loves the horse? Yeah... instead of using the picture, instead we'll just wash off the socks...one by one... insanely slowly... and then pondering.... pondering ever so much.... wiping off the mud.... on the horse's face... to see... if... there... was .... a .... star... GAHH Just do it already!! Yeah... issues.
Pacing: As demonstrated in the above section. It was so slow. Really could have been tightened. Every time the horse went somewhere else I sighed; another location? How long 'til he's home? Cause I wanna go home...
Acting:
Sorry, it was rather rubbish. I'm nervous about Irvine as Pip in the upcoming Great Expectations. Although perhaps it was the wretched, schmaltzy script, as that certainly didn't do him any favors, but his performance was rather one note-- simple, good boy, a little weepy, and can't play "angry" very well.

The girl in France (?); she was beautiful, and this was her first film... but yeah, all the slack I'm gonna cut her. Her accent was wretched and performance just so melodramatic...

The horse was great.
Right, I'm a poor sport on this one. It happens so bloody rarely, normally I like films and can find shiny happy things to each production.  War Horse, however.... I felt the need to tilt my head and make a massive "barooooo" sound at my utter disbelief, and slight loss of faith, in the Academy for nominated this self-indulgent, superfluous cheese.
Also seen recently: 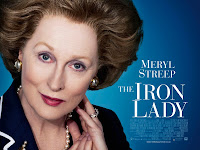 Iron Lady. Meryl Streep was bloody brilliant. I wasn't a huge fan of the film; the story or the camera work, but she was fab.
Ides of March: SO good. Great script, great performances, I was rather riveted.
My Week with Marilyn: Similar to Iron Lady, the story was a bit weak; it just kind of rolled, with little through-line to hang the rest of the film on, but hot damn was Michelle Williams amazing. The opening footage- I didn't know if it was her, or stock footage of Marilyn. Brilliant. 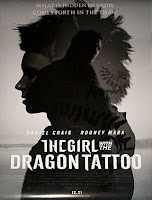 Girl with the Dragon Tattoo: Rooney Mara was amazing. And I LOVED how much ass she kicked. Daniel Craig was quite literally playing the hot side-piece role. How many times is the girl cast as a pretty thing that they might throw one or two capabilities to her in order to make her seem 'confident' or 'strong'; but in this, Lisbeth was the kick-ass, smart, street-wise, kind, capable badass. Yes, tortured past, and could be very, very difficult to watch at times, but she was bloody brilliant. Great character, and great performance. And James Bond got to play a Bond Girl sidekick.
Sherlock 2: Meh. I'll watch Robert Downey Jr. in anything, and this was pretty, and fun, and a romping good time, but the story was silly. It just kept being 'convenient' that they got out of scrapes, and there wasn't a ton to figure out in this. Yes there was the 'face twist' at the end, but mostly it was just chasing a baddie in a foreign land. Really? That's it? Yup. That's it.
Right, that'll do for now, yes? Sorry for the long delay-- things are going well with Elfin, the PhD is still rolling, and my international travel for my university is picking up quite a bit-- all is well in the world, but busy as anything!
Posted by ScullingOnSquam at 00:18 1 comment: