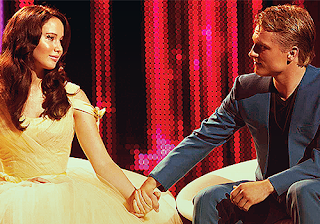 So I saw it again last night with my flatmate (I'm back in Wales now), and I'm having further issues with the Katniss/Peeta relationship. Overall, I'm still a big fan of the film; successful adaptation, well done, blah blah blah... but....

...I think it should be made more clear that Peeta is head over heels for Katniss, that Katniss is confused, and that she was 'playing a game.' The only real moment that stands out to me as honest emotion of care from Katniss is when she hears the canon, thinks Peeta has died, knocks the nightlock out of his hand and yells at him for scaring her; that was great. Really.....really great.  And maybe that moment when she decides to leave him in the cave to get the medicine. That was up there too.
But overall, we're left without clarity of the situation between them.  It would have just taken one line before Katniss went on stage; the line, "Have you told Peeta this?" Haymitch: "He's already there." That would have brought it to our minds; and again, on the train when she says they "try to forget"... they could have adapted that scene so it was a bit more clear that Katniss was playing a game, and Peeta never was. At this point it just seems Katniss is unsure; Peeta doesn't doubt her for playing a game with Haymitch without him knowing the rules.
Prior to this, in the cave (yes, I'm still harping on about the cave), we could have used the multiple kisses; seeing Katniss work out the game with Haymitch (one kiss = one parachute), and use it to her advantage to assist Peeta... then, when the 'big kiss' came (I say it in quotations because I didn't get to oooooo moment I should have from that kiss), it would make more of an impact; we would get that this kiss was different...that Katniss felt something different then....
....also, I missed the line from Peeta "you can kiss me anytime you want;" he recognizes that the cameras are on them and it'll make the audience happy, but he genuinely wants her there, with him. His attraction/love are never in question, and I did question it in the film. A few more lines, a few more interactions, and it would have set the stage for Peeta's heartache and Katniss's indecision; as it is, he's a bit disappointed and she's kinda confused... but I don't get the depth of emotion that was in the book, nor what I think ought to exist at this point before heading into Catching Fire.
I realize these sound like teenage girl desires, but I honestly do think it's that proximity to each other, growing from assistance to need to desire that makes the audience believe in the relationship, and perhaps also allows Katniss to believe in the possibility of attraction to Peeta. It's that believable bonding in the cave that sets the tone of all of the attraction, protection, and partnership events that happen in the following two books (I think it was Mockingjay where Katniss says, "That's what we do... we protect each other" after Peeta asks, "You're still protecting me, real or not real?").
That's all for now. I'll weigh in on the questions I've been asked in a bit, but I had to get that one off my chest :)
Posted by ScullingOnSquam at 16:49

Email ThisBlogThis!Share to TwitterShare to FacebookShare to Pinterest
Labels: The Hunger Games

totally agree Maggie.. I had the same issues that u have.. but then after giving it some more thought.. and a lil discussion over the net, i can assume that the director Gary Ross is aiming at a very evolving relationship that will blossom into love only by the 4th movie ( there are going to be 4).. Maybe he is taking a different route (playing on the confusion and triangle with Gale) and wants to develop the audience to believe that choice was inevitably had to be Peeta... Also keeping in mind the very serious tone he has used in the movie, maybe he felt that the one kiss we saw should only be only the beginning of things.. It was definitely not the "stirring" moment but still seemed every bit of a private moment between the two.. MJay spoiler: the end scene in spiderman 3 where Peter arrives and takes MJ's hand and the unspoken acknowledgement they share resembles what the director may use for the MJAY end..

just so u know i am big katniss/Peeta fan..

I agree the scenes between Peeta & Katniss should have been more emphasized. In the book, I was heartbroken for Peeta due to his sincerity & devotion & 11 years loyalty to Katniss. I was upset often at Katniss for being so indecisive and cold towards Peeta mad even when she, spoiler...kissed Gale in Catching Fire. In the movie I wasn't as bothered. To me it felt like the kiss derived from an opportunity in a dark cave which could easily result from any random harmone driven teen. To me it would make no sense to see Peeta that heartbroken knowing Katniss isn't in love with him. In the book, I nearly cried when he found out it was all for the game. Perhaps a 2nd director can do at better job in this area...as rumor has it Gary Ross would not be directing Catching Fire.