Oh Star Trek... I am Converted. 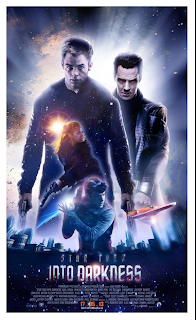 I've always been a sci-fi and fantasy geek, clearly, but Star Trek was always just a little too far into the sci-fi path for me. I never geeked out about it. I enjoyed Next Generation growing up, but that was mostly because of my crush on Wesley Crusher, and because watching it was bonding time with my mom.

I loved the reboot. Loved it. And I'm happy talking about Star Trek here because I do think of it as an adaptation. It may not be based on an original source novel like the other things I've looked at here,  but it is derived from a previous existing piece of media. People have an idea of what things should look like before going into the cinema based on the multiple TV shows and films that have come before. Therefore it's the same principles I work with on adaptations.

So anyway, Star Trek: Into Darkness was amazing. I loved the first one of the new reboot, and have watched it many, many times, and therefore I am so glad to see that the second installment not only meets the expectations from the first one, but builds the plot, characters, and relationships; not to mention the technological and special effect advances.

I've seen it twice already and really think I need at least one more viewing. I've always been a Benedict Cumberbatch fan (made intensely strong by my love of Sherlock), as well as Chris Pine and Zachary Quinto.  The latter two had such a wonderful chemistry, banter, and timing with each other in this film. The former was so deliciously, wonderfully bad but also understandably so, that he was a joy to watch. It often takes quite a bit for me to get caught up in the story of a film; I'm usually too busy analyzing it-- actor performance, how they got that shot, scenery, or costume design that the story is just one more thing I'm examining. That didn't happen this time. I was EXHAUSTED at the end of the film. I felt like I'd just done battle alongside my friends to save my ship from the big bad guy. 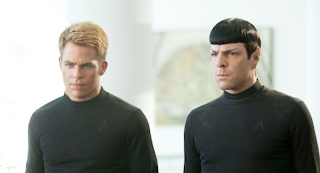 Relationships: This was the biggest positive for me. There was so much development and complexity, but also humor, kindness, and authenticity.  The story was great, the effects great, the pacing and suspense great, but I think all of that hung on the growth of these characters, and the relate-able relationships they've developed in this film.

Spock and Jim- teaching Spock what it means to have a friend, and to have someone care about you... I enjoyed when Jim asked him, "You know why I went back, right?" but Jim never really answers it. He wants Spock to figure it out, that it's because Jim likes Spock, and cares about him; they're friends.

I liked that Jim showed some vulnerability before he jettisoned himself across space to the Big Bad Starship, and told Spock that he didn't know what he should do, he only knew what he could do. Jim was so much more human in this film with his uncertainty about himself, his loss of Pike, the father-like figure, his allegiance and devotion to his crew, and even the beginning sparks of a relationship, not just a fling, with Carol.  And who didn't get at least a smidge choked up at the  scene pictured on the right. I'm still reeling from the structure of this scene. The emotion of friendship, the acknowledgement of fear, the desire to comfort but the inability to contact, and personally witnessing the passing of your best friend, and being powerless to stop it. And Spock crying. Brilliantly done scene in terms of dialogue, pacing, and actor performance. I loved it. 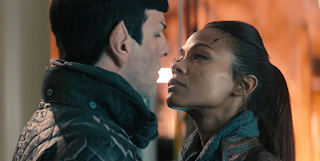 Spock and Uhura-How fun was that? I mostly enjoyed them fighting, and Jim's line of "oh my gosh, are you fighting? What is that even like?" But Spock and Uhura came to a neat understanding in their relationship, I think.  She is so capable (languages, facing the Klingons, backing him up in the final fight with Khan, etc.), and calls him on his crap; I think she can tap into the human side of him faster than anyone, and encourages him to question his decision to not feel emotions. They're a strong, and functioning couple. It's not all Hollywood romance, or even the cheesy romance of past Star Trek couples. They work hard at their relationship, it shows, and I think strengthens them as characters. I certainly enjoyed watching them. 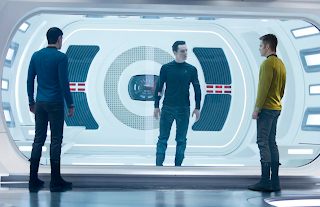 Khan and Everyone: Oh Khan was fabulous. The body language, the vocal tone... it wasn't too far off from his portrayal of Sherlock, really. He's overly gifted, knows he is and is therefore quite cocky but in an endearing way, but Khan has that extra evil streak where he'll happily hurt whoever to get what he needs. And that duplicity was so intriguing. You knew it was coming, particularly as soon as you found out he was Khan and not 'Harrison' (in this scene), but the suspense of when, and how drove the conflict throughout the film.  I loved watching him (or his stunt double, whatever...); he moved like a dancer: tall, graceful, sharp, controlled, and watching him fight was beautiful. Even when Jim was punching the heck out of him and he just had a look of curiosity on his face. His beautiful, beautiful face: 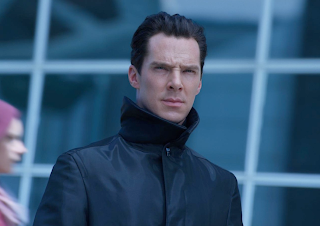 I also have such great fun watching Abram's filming style. He goes to great lengths to give shots a retro feel (so. many. lens flares. But I love them), and utilized 'old school' and unique techniques to get the shots he wants. If you've never watched the special features on the first film, I highly recommend it. The real-life shots and the CG shots are so in tune with each other, that it's difficult to tell where special effects end and the actual thing begins, which I think helps the audience member stay in the story. If something was blatantly CG-ed, then we'd notice it, and it'd take us out of the story. But each shot is stylistically like the next from the super-alien world in the opening scene to the normal conversations between characters. All have a great feel of authenticity to them. 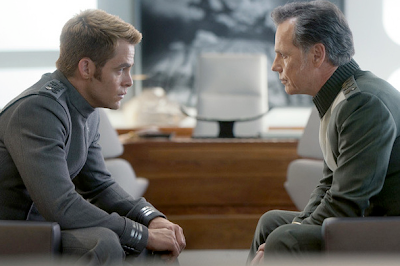 All in all, this was a tight, well-written story that moved all individual story lines along in this new, re-written Star Trek world of Abram's creaction (Scotty, Bones, Sulu, and Chekov included) forward, and gave brilliant conflicts to structure the story around.  A cocky captain brought down to a normal man, earning the chair, coming into his own, and embracing a brilliant constructed conflict in Khan.  A crew supporting their captain, coming together as a strong, cohesive unit, and all of the humor, action, effects, drama, music, and design we've come to expect from this Star Trek reboot.

Boot away! I can't wait for the next instalment! It's still 'in development (2016)' on ProIMDB, so we'll see what comes of it... but this new Trekkie is already geeking out about it.