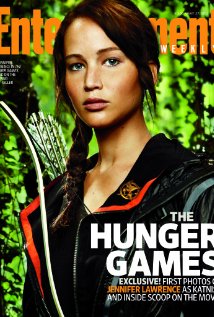 First of all, how exciting to have a two and a half minute trailer!The 30 second trailer seemed so rushed, didn't give any sneak peaks to highly anticipated scenes or anything-- just showed Katniss, in the woods. That's it.  Plus a 30 second trailer doesn't provide enough time for fans and viewers to digest and come to terms with the images and story; it just assaults the senses with a quick deluge of information. I spent most of my time with the 30 second teaser going 'weird; district 12 looks really lush; oh wait, that's the arena; who's whilstling? That's weird!" Yeah... not really focused on the film with that 'teaser.'

So I'm glad that we finally have a longer trailer to dig into.

Overall, I think it's a decent trailer. I'm still very skeptical of the adaptation thus far as we don't know anything. So I'm just reserving my enthusiasm for now. I hope they've taken care of it. I spoke to their development team early in the adaptation process and they were focused, concise, and very business-oriented, and I think in the good way. That's the feeling I took away from it anyway. I'm hoping they continued on their path of faithful, but well-done and effective adaptation that doesn't alienate the fandom but still provides function, high-quality entertainment for those who haven't read the book. Fingers crossed!
So a bit of the shot by shot, shall we?

:09- District 12 is rather lush; I realize this shot is after the fence, so it's going to be more lush, but even the shot before where she's running through 'town', I pictured that as quite industrial, grey, and run down. Not like a 1800's Western ghost town. Interesting. Perhaps this is to project country, pastoral feel to Katniss? Make it familar and relatable, as opposed to the crazy Capitol-ness we see seeping in at :32

:37- Ahhh there's the cold, steely, industrial District 12 I was looking for! Look at the use of color (or lack thereof). Light blues, whites, and almost all caucasian; this creates a uniform look, allowing no one in particular to stand out, which to me, creates a 'nameless number' scenario. You can see that the capital would not look at these people as individuals with unique, precious lives. Instead, they would all be the same, might as well kill two for sport. Very effective costuming and art design.

1:00- Ahhh it's a reaction like this why I'm thrilled they chose Jennifer Lawrence for this role. She's got gumption, depth, and maturity to wear the heavy burden of responsibility/pseudo-motherhood. This reaction kicks butt. I can feel her panic and my heart breaks a bit. Plus, look at this shot. It's beautifully structured. The Capitol is in power (higher, in the foreground), the crowd flanking on either side, but ultimately splitting the frame into thirds vertically (the crowd on the left, the path, the crowd on the right). You can almost split it in thirds horizontally too, with Katniss occupying the top middle of the frame. Well. Done.

1:16- Yeah, this shot is getting a footnote in my thesis. The build up begins already with words like "epic" and "best-selling" which projects to the viewer that this is a big friggin' deal. If they havent' heard of these books, they're all, "Why the hell not? They're huge and everyone else has!" And if they have heard of the books, they are nodding to the big fans and are all like, "Yeah, you know it's a big deal, so do we, look how much we know..."

1:21- First I noticed that they're utilizing the 'thirds' rule again, and then I thought-- huh, this kinda looks like Thor's hometown. A little less shiny, but still futuristic and modern. Interesting :) Also of note is the sun shining upon it. It makes it look like a place of wonder, which it is to our heroes who have only ever heard of the capital; there is wonder, but for them it's of the terrified kind, not the pleasant "oooo pretty" kind...

1:29- Hrm... not at all what I pictured for the 'girl on fire' dress; but that was supposed to be in a chariot... so I'm going to guess that this is the jeweled one worn later. No jewels... but still stunning. You get the feeling of splendor, glamour, and it's a red-carpet arrival/make an impression type dress, clearly. However, the look on her face definitely says that something is wrong. As does the cheesetastic host holding her hand in the air and smiling about her like she's a prime used car. Weird. But fittingly so. Like a Barker's Beauty... on trial.

1:48- oh dear... did they get the hairstylist who did Jacob's wig in the first two Twilights? That's abysmal! I love the casting of Woody Harrelson for Haymitch though. I can completely see him being the crazy, stumbling drunk, who is strong at his center but has simply been drinking for so many years because every year those that he's supposed to be supporting die. He also can have that slightly southern accent, perhaps supporting that idea of District 12 as a Western, 'cowboy' territory.

2:10- Ahhh this shot is bloody brilliant. Look at the thirds rule-- again-- clearly they're fans of this rule; also, the fact that the entirety of the district is gathered to watch her descend upon the games. It's clearly a national event for "entertainment" but it also breeds fear and ensures control. All are frozen, watching one of their own go into battle. You see the hope of Katniss's neighbors, and the proud salute they share... the bagpipes in the background are a bit distracting... bagpipes? Really? But the sentiment is clear and valid.

2:16-2:23- That count down is phenomenal. As the trailer is nearing it's end, the count down builds the tension, and cuts to a different person with a stake in Katniss's life with each second counted down. Prim to Cinna to Gale... lovely. We can tell something is coming, she seems befuddled so we're worried about her, but the count down keeps going, relentlessly, so you're willing her to focus.... this is a clever and effective trailer technique. It draws us in. It's the hook. It gives suspense and intrigue. Nice!

2:27- then it's followed by a mad, exciting dash, collecting materials, a hand held camera for a lot of it which gives the impression that we, too, are running like mad for our lives, there's a cut to running like crazy through the woods...so you get the idea; we're running. A lot. It's a chase, and if you're caught, you die. And then BAM! We're hit with the fiery, mockingjay pin, followed by the quote "May the odds be ever in your favor," both items that are well known to the fans "in the know".  It's a moment where the fan can relate, react, and take a quick breath from that drama of the last fifteen seconds, and possibly shriek with excitement and anticipation, and hopefully not disgust.

Well, that's all for now. I'm intrigued, the production values look good, they're clearly covering their bases with Entertainment Weekly covers and directed advertising campaigns. I hope they go the extra mile to ensure the fans stay onside, and that the fans support rather than critique the adaptation. Here's hoping!

Are there any parts that you're most excited about seeing on the screen? Most nervous about?

Great post! I love your insight -- I'm really excited for this movie. I have read the first two books but am still waiting for the third to show up at the library for me!

The area in which I assume District 12 exists is Virginia/West Virginia/Kentucky area. Those places are very lush.
These bits of the movie were actually filmed in Georgia..North Georgia by the looks of those hills, which is still part of Appalachia.

Hi Maggie,first of all i wanna thank you for being generous enuf to answer all my questions during the harry potter movie release last year.. u were seriously lucky to have watched it before the thousands of us and u made sure to fill us in on all our little doubts and anxieties.. :)
M glad that after months of waiting the movie has released and it's by far exceeded my expectation..
Some questions i do have relating to the books, i hope you do take some time off to answer them:

1. Why do u think the careers accepted Peeta in their group knowing he likes katniss??
2. Do u think Haymitch planned on saving both Katniss and Peeta since 74th HG?? or had he made his mind to just let Katniss win alone??
3. Why do u feel District 1 & 2 are so "into" the Games.. Just because they win always and get food.. or do u think there's another reason too..
4. Do u think Katniss actually loves Peeta?? I love Katniss/Peeta.with most of my debates with my friends, this question comes up a lot..They say she dint make the choice but imo throughout Mockingjay,She missed him..and when she realized she had lost his love, was when she was struck how much empty her life was..Can you please answer..and plz do mention a stage in any of d 3 books where you were absolutely convinced that Katniss ”REAL”ly loves Peeta as much as he does?
5. Do u think Gary Ross will manipulate the story to focus on Katniss/Gale triangle like twilight??

thanks a lot, Maggie .God bless & Keep up the good work…
Love,
Anuja