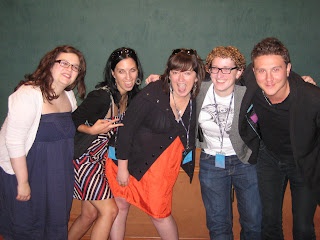 TwiCon Day Two: Oh girl... so this was my big day. For some reason, the organizers of TwiCon decided to put ALL of the academic programing and panels on the same day. There was simply too much going on. Granted I approved what I set forward, but of course I didn't realize there'd be a massive line for Christian Serratos's autograph and tickets for the 100 Monkeys concert, plus insanely popular informal programming sessions like Alice's Makeover Room, and Jasper's Relaxation Room, so it was manic.!
(pic is Courtney Smith, Genevieve Koski, Marah Eakin, Angela Watercutter, and Sam Bradley)

One of my biggest panels was the 'Music Industry and Twilight Panel.' It was rockin', regardless of our small audience numbers. I had Marah Eakin of Bloodshot Records, Courtnet Smith who worked for MTV2, Genevieve Koski who writes for The Onion/The AV Club, and Angela Watercutter who is a researcher for Wired magazine. So basically, kickin' people who know more about what they're doing than most people, and with all of them combined, the conversation was so insightful.

The industry pro's came out first, talked about how artists get onto labels, what labels mean, how songs get onto soundtracks, who picks those songs, what hurdles may occur... all of that nitty gritty stuff that we just never hear about but most of us think about. Then we brought out Sam Bradley (co-writer of 'Never Think' amongst other lovely credits) and he talked about what it's like from a musician's point of view. He was brilliant. I really appreciated his honesty and humor. He could laugh at himself, the situation, the circumstances...and still seemed to be having a really good time.

So my big gripe was the advertising for the session. If people looked in the program, they just saw 'music panel'...and not who was there. Who wouldn't want to see these people?! So yeah... It was awesome. The audience that attended had possibly one of the best seats in the house and got some stellar inside info on the music industry and Twilight's influence with the music. Of course I wish more people were there, but we had such a good time, I don't think anyone really minded. 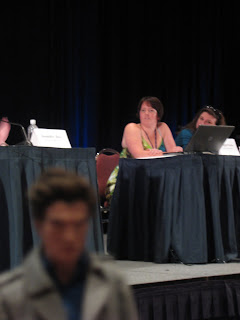 So after the music panel (btw, I'm going to post all of the documents, PPs, playlists etc. that I can, as soon as I can, so you can see all that we saw in regards to formal programming), I chaired the Webmaster's Panel (talking to webmasters from HisGoldenEyes.com, TwilightSeriesTheories.com, BellaAndEdward.com, TwilightGuy.com, and TwilightMoms.com), then had a quick break where I ran up to Kalle and Kassie's podcast and did a bit on the 'news of TwiCon' with them, then back down for the Adaptation Panel. (Pocket Edward-wannabe joined in; picture is me on panel, with P.E. in the front)

It. Was. Awesome. Every now and again, I get a feeling that I'm doing what I'm supposed to be 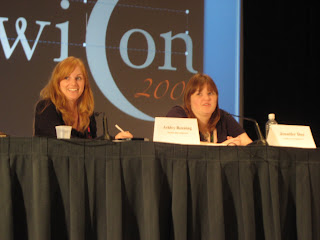 doing with my life. TwiCon has been a good experience: networking, learning what works and what doesn't, etc., but overall, I don't really think I want to do this again unless I'm running it. There were too many basic things looked over, and the partners seemed so stressed; they forgot this was a fun, enjoyable, exciting event! But I digress... my panel was great, because once I got started talking about the adaptation of Twilight... it was brilliant! My fellow panelists and I had a great banter, we took lots of questions from the audience, debated with each other, fought for our opinions about actors and scenes, and generally enjoyed all aspects of what makes a book work, what makes a film work, and what were the hurdles that we've witnessed and what do we anticipate for New Moon. SO much fun. I left that flying high, feeling good, and full of fun....that's saying something after two days of nearly no food and nearly no sleep! (Picture is Ashley Benning and Jennifer Dee on the Adaptation Panel) 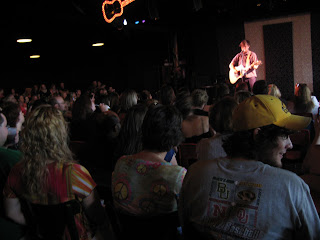 Afterwards we had a well-deserved break, saw Bobby Long and Marcus Foster play at Poor Davids (oh so much fun; they are hysterical, and they played together at the end... very fun. I'm a fan; I think I like Marcus and Sam better than Bobby, oddly enough, but it was uber fun). Then we bolted back to the hotel, grabbed some grub, and caught a bit of the 100 Monkeys show (where I also met Larry Carroll of MTV, who apparently wants to look at some academic-y elements of Twilight... hi. Rockin'.) (Picture is Bobby Long)

That was possibly the fastest post I've ever written, but those are the immediate bullet points so I remember what to expand upon later if I want to.

Lots has gone wrong which really makes me want to run my own convention/conference (possibly after the PhD thing is done... we'll see), but the things I've been involved with have turned out really well. I've been super happy with all of those efforts. My panelists are great, as are my volunteers, and honestly, those little details about friends, thanks, and fun times can really make 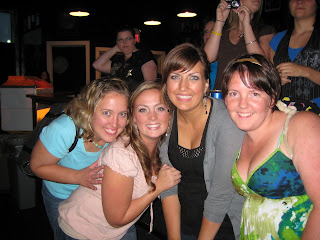 all of the difference when organzing something like this.

More soon.... and eventually I'll have all of my pictures up on webshots, but for now, I shall tease you with a couple of random shots. (Picture is Danyelle Utley, Kassie Rodgers, Kallie Mathews, and me).
Posted by ScullingOnSquam at 05:27

OOh!!! I made it onto the famous Maggie blog again! That's what comes with having famous friends, I guess.

Thanks for the update on the goings-on at TwiCon! Um...for those of us who are clueless, can you label your photos so we know who is in them? I got you & Ash, but don't know the rest. Hope you met some hot vampires at the ball!

My friend and I wanted to go to the music discussion but we could not find it anywhere on the schedule. Everyone we asked had no idea where or when it was. So we went to the concert instead. It was good but we would have really liked to have gone to one of the discussions/classes. Everything had ridiculous lines.

Thanks Maggie for this post - very interesting! I'd be interested in getting a transcript or audio file of the music panel discussion... I'm considering going into that line of work, and actually got an interview at a music for movie prod company v soon! Good luck if you consider organising such conventions in the future. Exciting projetc, let us know if you ever need some help. Thanks! Audrey

Well... those Reelz guys taped everything that happened in that ballroom, but I'm not sure we'll ever see those videos. And there certainly weren't any transcribers... I wonder what will happen with the Reelz stuff.

Good call. I'm investigating about the Reelz stuff, because I want to see all of the things they filmed but I didn't get to see... I'll let you guys know if I find something out, oh and I'm working on Day Three report now. Should be up tonight :)

Are you still planning to post the music panel's playlist picks? I'd love to see those... Thanks!

Maggie, Regardless of how any other event may have gone, Formal Programming rocked! We love you! I really enjoyed my time.

After I read all your stuff I now wish I had waited to buy tickets to one of your future events. I am sorta dreading my Nashville Twi-con now. I had such high hopes. I was praying they would do one in Memphis. How about you do one in Memphis and I will be the first one to buy tickets from you. I agree, it should all be about fun, and memories. Not hectic and crazy....think Memphis.....Karen